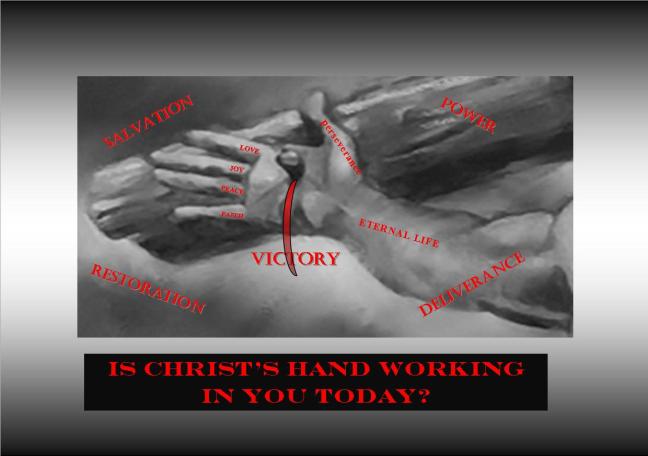 I cut my hand this morning while preparing breakfast. The sharpness of the knife sliced more of my finger than the frozen meat needing cutting. My understanding of the cardiovascular system provided some quick thinking while my spirit became captivated with the LESSON GOD WAS PROVIDING ME IN THE EXPERIENCE.

Never allow the sudden entrance of painful experiences to distract you from the fact that GOD IS OMNISCIENT, OMNIPRESENT AND OMNIPOTENT.

While the blood poured out of my finger and the intense, sharp sting of the running water made me cringe with concern – so much so I had to let the finger bleed until the thought to use gravity kicked in – the Holy Spirit was QUICK to remind me of Christ’s nail-scarred hands as He hung on the Cross BLEEDING for me. Since He was PRESENT in the moment  I was at peace with the trauma of seeing me bleed. Some would rush to the hospital with the cut I sustained-which may be NECESSARY in those cases – but God’s ALL KNOWING POWER prepared me for such a time as this.

OK the bleeding slowed considerably as the use of gravity was maintained for 11 minutes without interruption. Obviously the cooking stopped but more importantly the PRAYING began. There are many posts here on ConquerorShots chronicling the slogan “Prayer Changes Things.”  (Use the search bar to see) It soothed my doubts and calmed my fears. Suddenly I remembered one of the points from yesterday’s Cyber Bible Study   lesson I taught on Jacob. (You can sign up to get in on this free Spirit-filled weekly experience)

In Genesis 32:24-29 we see that Jacob wrestled with the Angel of the Lord all night long. The Bible lesson for us today is that Jacob’s experience with God’s Word cut him so deep it soothed his fears and produced faith to trust in Him exclusively.  The text reveals that at this stage Jacob was a mature man, having persevered 20 years of toils prescribed by Laban. Jacob was a father of 12 with 2 wives who supported His Spiritual reliance on God. Jacob maintained an abundance of fear for he and his family’s lives were threatened due to the death sentence his brother Esau vowed years ago.

Jacob wept bitterly with anguish and heartache having lived to realize that all his worldly treasures could not deliver him from the consequences of his sinful past having stolen Esau’s birthright and blessing. God’s Providence for Jacob is undeniable as is the EFFECTS HIS CONSISTENT WORD HAD ON JACOB. At the time of the text Jacob realizes DIVINE incentive to wrestle (pour out his heart’s pinned up anguish from adolescence, working for Laban, having to marry Leah and looking at her crooked eye as the mother of  7 children and all the years he had to wait for his love Rachel to birth Joseph) with the Second Person of the Godhead – Jesus Christ INCARNATE – to the point where God changed Jacob’s name to ISRAEL. The evidence of it being a physical battle was the onset of the hip joint injury Jacob sustained. C.B.S. classmates have learned the name change was OBVIOUSLY part of God’s Plan made before the world was formed. (Psalm 90:2)

This name change is so significant it can’t be overlooked. The seed that was originally predicted in Genesis 3:15, promised to Abraham, Isaac and Jacob was now set in motion to become a DIVINE, UNIMAGINABLE, LOVING, JUSTIFYING SACRIFICE FOR YOUR SINS AND MINE through the manifestation of the Nation of Israel. Jesus Christ – the Lamb of God, the way the truth and the life, the Word in the Beginning that was with God and was God which became flesh so that He could identify with His Creation and SAVE US FROM ETERNAL JUDGEMENT AND DAMNATION – IS THE SEED PROMISED TO THE PATRIARCHS.

God confirmed Jacob’s anguish as He allowed me to nearly slice off my finger. THE WORD OF GOD CUT JACOB WITH SHARP ACCURACY over time whereas a physical knife can cut our flesh deeply and IMMEDIATELY. TODAY, children of God/members of the Body of Christ, experience God’s WORD with QUICKNESS, ACCURACY and POWERFUL LONG SUFFERING RESULTS. THESE RESULTS ARE POSSIBLE BECAUSE OF THE SPIRIT OF CHRIST NOW LIVING INSIDE US THROUGH OUR FAITH IN CPR² ON A DAILY BASIS.

Jacob wrestled with Him in the Old Testament. We wrestle with Him daily as He is revealed in the Pauline Epistles as the Head of the Body/Lord and Savior and our righteousness and peace.

THE PRAYER: “Thank you Lord for allowing me to see how your Word operates on my soul like a knife on my flesh. My sin-sick soul is pierced with the DOCTRINE, CORRECTION, INSTRUCTION AND REPROOF OF YOUR WORD AS IT LIVES IN ME LEADING ME INTO ALL TRUTH FOR YOUR NAME’S SAKE WITH SHARP ACCURACY WHILE I LIVE THE CONQUEROR LIFESTYLE – in Jesus name amen!”