Children of God, when trouble comes (and it always does) do not succumb to the trial and fail by employing your own strength. You can find the courage to stand up and not be overtaken when you know the Divine outcome of the Troublemaker. You can have peace in the midst of the storm through “the God of Peace.” Enjoy this “shot” by way of my mom – Sister Cheryl DeGroat-Payne. 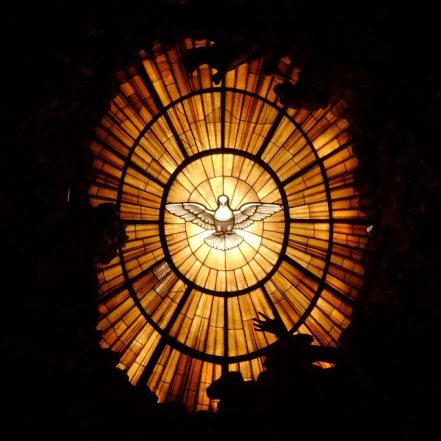 The apostle Paul exhorts Christians in Rome to endure the hardships brought on by the wiles of the devil.  The Holy Spirit of God – through the believer’s faith in the death, burial and resurrection of Jesus Christ for remission of sins – inducts us into the army of God.  The resurrecting power of His shed blood within believers empowers us to resist the enemy-until His return. We have the blessed assurance as good soldiers of Jesus Christ to know we are predestined to victory – the source of the God of peace. His message still resonates Divine truth to us today.

The God of peace foreknew -from eternity past, into eternity present and further to eternity future – our status as a lost and trouble-ridden humanity.  He loves us so much that he planned to divest himself of His glory by stepping down out of infinity and descending into time. Lowering Himself to human form, He became as we are – human – so that we could become as He is – Spirit.

Jesus said, Peace I leave with you, my peace I give unto you: not as the world giveth, give I unto you.  Let not your heart be troubled, neither let it be afraid (John 14:27).  Jesus knew humans are heavily reliant on their five senses. He also knew we would live our lives with limitations stemming from ignorance of the oppression of the spirit world system against us.

These spirits dwell in the heavens and stand in opposition to God and us. They have a steadfast allegiance with Satan, the archenemy of God, as their head. He governs this world’s system, known as the Kosmos (GR.). The Kosmos hated Christ and it hates us.  Jesus said, If the world hate you, ye know that it hated me before it hated you (John 15:18).  He went on to say, These things have I spoken unto you, that in Me ye might have peace.  In the world, ye shall have tribulation: but be of good cheer, I had overcome the world (John 16:33).

“In this sense of the present world-system, the ethically bad sense of the word, refers to the ‘order,’ ‘arrangement,’ under which Satan has organized the world of unbelieving mankind upon his cosmic principle of force, greed, selfishness, ambition, and pleasure (Mt 4:8,9; Jn 12:31; 14:30; 18:36; Eph 2:2; 6:12; and 1 Jn.  2: 15-17).  This world-system is imposing and powerful with armies and fleets; is often outwardly religious, scientific, cultured, and elegant; but, seething with national and commercial rivalries and ambitions, is upheld in any real crisis only by armed force, and is dominated by Satanic principles.” (Scofield Reference Bible footnote Revelation 13:8).

“The God of Peace shall bruise Satan under your feet shortly…”  The Word of God urges and encourages us to persevere in resisting the wiles of the devil with great confidence in Him and courage to trust Him. It promises we will find ourselves fully discharged from this ongoing spiritual battle. Our LORD and Savior Jesus Christ is the foundation of the expectation of this promise being fulfilled.  In the meantime, encourage yourself in the faith (become more and more inclined to trust in the LORD) and await the thrill of having the neck of our enemy – Satan the devil – under our feet while witnessing the abject humiliation of our conquered foe.  Thou shalt tread upon the lion and adder: the young lion and the dragon shalt thou trample under feet (Psalm 91:13) .

The exclusive purpose in the manifestation of the Son Of God taking up human flesh is to destroy the works of the devil in and through the Body of Christ, which is called the Church (earlier referred to as the Army of God).  It is an organism comprised of believers. These are they that have surrendered their lives to the Lordship of Christ – as their Head. This is the mystery hidden in God throughout the ages. God was in Christ reconciling the world unto Himself. He did this by defeating the power of sin and death through His triumphant resurrection.

Hebrews 2:14-18  (PHILLIPS) Since, then, “the children” have a common physical nature as human beings, He also became a human being, so that by going through death as a man He might destroy him who had the power of death, that is, the devil; and might also set free those who lived their whole lives a prey to the fear of death. It is plain that for this purpose he did not become an angel; he became a man, in actual fact a descendant of Abraham. It was imperative that He should be made like his brothers in nature, if He were to become a High Priest both compassionate and faithful in the things of God, and at the same time able to make atonement for the sins of the people. For by virtue of his own suffering under temptation He is able to help those who are exposed to temptation.[i]

He that committeth sin is of the devil; for the devil sinneth from the beginning. For this purpose, the Son of God was manifested, that he might destroy the works of the devil. (1 John 3:8)

May the God of hope fill you with joy and peace in your faith, that by the power of the Holy Spirit, your whole life and outlook may be radiant with hope.(Romans 15:13)

The God of peace be with you all, amen. (Romans 15:33)
Cheryl DeGroat-Payne

[i] J. B. Phillips, “The New Testament in Modern English“, 1962 edition by HarperCollins